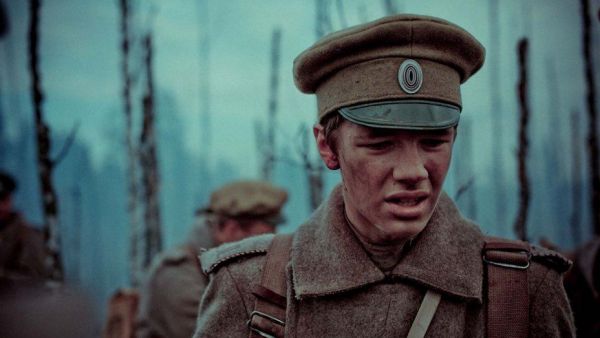 By Deborah Young @ The Hollywood Reporter
A more realistic "1917," but it’s still a surreal war.

Latvia’s biggest grosser in the last 30 years is the harrowing autobiographical account of a 17-year-old farm boy thrust into the trenches of World War I.

A different point of view on the First World War told with the chilling truth of someone who has lived through combat and its shocking aftermath, Blizzard of Souls (Dveselu Putenis) derives its power from its strong, simple depiction of war seen through the eyes of an innocent 17-year-old soldier. In this it may be compared to Sam Mendes’ 1917, which was also based on eyewitness accounts of the war. The difference is that here the drama is underscored by evident, old-fashioned patriotism as the small Baltic country of Latvia tangles first with Russia and later the Soviet Union.

Adapted from the book by Latvian writer Aleksandrs Grins, which was banned in the U.S.S.R., the screenplay by director Dzintars Dreibergs and celebrated screenwriter Boris Frumin admirably reduce the situation’s political complexity to the natural allegiance felt by the young hero Arturs Vanags (Oto Brantevics) and his family. The story was based on Grins’ own war experiences in a Latvian battalion; years later he was arrested and executed by the Soviets after they occupied Latvia in 1940. Little surprise, then, that the film adaptation, one of the most expensive in the country’s history, struck a note of deep-seated patriotism and broke domestic box office records after its release in November.

Dreibergs, known up to now for his sports documentaries, directs with a great deal of male force and gusto. Unapologetically a war movie, its primary appeal will be to genre fans, though its historical ironies open up another avenue. Beyond that is the gripping drama of mophead Arturs, who is introduced being caressed like a child by his mother on the family farm. When some angry German soldiers turn up and senselessly shoot her, he is given no screen time to mourn. The Russian imperial army has ordered all the farmers to shoot their livestock, burn their homes and clear out before the Germans advance.

This grim beginning is just the first trial of Arturs’ innocence. Though he’s underage and his dad (Martins Vilsons), a former marksman, is overage for the army, they are both conscripted into one of Latvia’s first national battalions. The thrill of training with fake guns and grenades is soon followed by a real crawl through the mud while shells burst around them. He grows up on the battlefield, fighting at the side of his single-minded father and his brother, and their three lives are constantly in jeopardy.

In contrast to the emphasis on trench warfare typical of World War I, Dreibergs and his DP Valdis Celmins scour the countryside, taking the small platoon over many different terrains, one more terrible than the next. The imagery is epic and dreamlike at the same time, the battleground covered in mist, grain stubble, snow. It is a space in which no direction exists, as Arturs discovers in his first frightening mission stalking Germans through a foggy wood of dead tree stumps. When he bayonets a young soldier to death, staring him in the eyes in horror, it seems totally unreal.

And in a way Arturs himself, though fetchingly portrayed in his various phases of lost innocence by Brantevics, remains an unreal character. Although he has a family and even a girl — a serious-minded nurse (Greta Trusina) who tends to his wounds on more than one occasion — he seems less an individual with problems to solve than a symbol of Latvia’s backbone. Not quite a superhero, but a survivor who emerges from hell with morals and ideals intact.

His subjective p.o.v. turns him into a testimonial for posterity, in the way of many of the great Eastern European war films, Elem Klimov’s Come and See being foremost among them. Every horror is visited upon him, from a gas attack in the infamous 1916 battle called the Island of Death, to botched orders that the Latvians join a Siberian unit that refuses to attack. The battles in the snow are particularly visceral, ending in frozen bodies stacked like wood in a woodpile while Arturs wanders around them in a daze. It conveys a strong sense of how disorienting combat is to the warriors, who are robbed of their expectations of heroism and glory and left with little more than the will to hang on when all strength and hope is gone.

But there’s more to the story. The last 20 minutes turn the tables on Arturs. The euphoria of victory and going home vanishes when the Russians order him to take part in a firing squad and execute his Latvian comrades-in-arms. His final adventures are a head-spinning foretaste of the long Latvian-Soviet confrontation that would follow. (Latvia’s independence was only restored in 1991.)